It was a cold night in early winter, with light rain and mist partially obscuring a full moon on Friday the 13th.  We shivered in the car as we raced down the country road, past vineyards and cobble-stone churches.  Then we turned into a long lane-way lined by poplar trees.  The car headlights bounced back mysteriously in the light mist.  And then we arrived, greeted by a fairy-lit archway that beckoned into the warm farmhouse beyond.  We tripped through under the lights, past warm coal braziers set out to warm us, and stopped only to pause to ooh and ahh at flame-throwers practicing their art in the gardens. 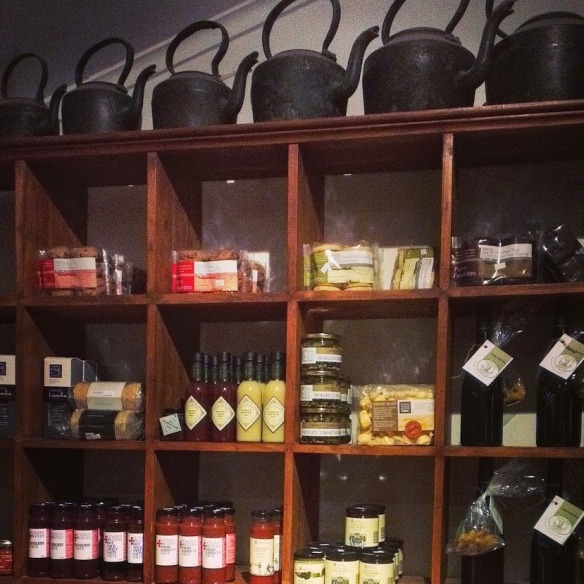 You could be forgiven for thinking that I am in Europe, and indeed it felt a lot like that.  But actually I was only 15.1km from my Canberra home at Poacher’s Pantry – a gourmet smokehouse and cafe/restaurant nestled near Murrumbateman.  And it was the venue for a marketplace showcase of Poachers Way, an event organised by VisitCanberra as part of the 101 Local Humans campaign.

I love being a human.  Not just the fleshy kind, but the Canberra tourism Ambassador kind.  While hubby was home minding the kids and feeding them ice-cream, I walked in out of the cold to be greeted by the cheery warmth of a cup of steaming gluhwein.  It was prepared by the Four Winds Vineyard, made from a blend of Cabernet Merlot and Sangiovese, spiced with peppercorns, cinnamon, cloves, honey and all sorts of other goodies.  It warmed my fingertips, and I soon it put roses in my cheeks as well.

The Germans have a term for this sense of enjoying the coziness of life: gemutlichkeit. There is no direct translation in English for this, but if you have ever enjoyed a glass of red wine with good friends around a crackling fire, you will instinctively know what gemutlichkeit means.

I wandered around and try a bit of this and a bit of that from the various stalls that have been set up at Poacher’s Pantry.  It was like a market place, set up just for us local humans.  And it gave me a taste of Poacher’s Way, which aims to pull together the region’s best in terms of wine, food, art,craft and good living.  Kind of like a road-map for the ultimate weekend away, where you can wistfully imagine what life would be like if you made a real tree-change into this idyllic rural setting.

According to Richard Everson from the Country Guesthouse Schönegg, the Poacher’s Way concept is all about enjoying relaxing and leisurely pursuits.  Many of the owners of local businesses (Poacher’s Pantry being a case in point) have left successful corporate careers to pursue a life that is simpler and more in tune with nature.  He insists that his teenage son pauses every evening to appreciate the beauty of each sunrise framed over the natural beauty of the Murrumbateman region.  I hope that one day his son will understand that few office workers enjoy this simple luxury.

I lingered past the Gunderoo Colonial Inn table, and sampled some pickled olives, smoked salmon and smoked chicken.  I was warned that the chilli oil is fiery so I steered clear — others dived in fearlessly and found out that it has an authentic and potent kick.  I stopped by (twice) to sample a friendly apple cider at Jolly Miller Cider, while pausing to enjoy some pieces of artwork from beaver galleries and touch creations from the Bungendore Wood Works Gallery and the wood-fired pottery from Old Saint Lukes Studio.

I nibbled on the prosciutto open sandwiches from Poacher’s Pantry, and tried to decide whether I liked the pork prosciutto or the peppered sirloin prosciutto best (pork prosciutto, but it was a hard call).  I tried various toppings as well: the onion jam is dreamy, and the picked caper berries added a nice crunch.

I also enjoyed the Asian-style duck cornettos made by Poacher’s Pantry.  This brought back fond memories of Peking duck at banquets in Taipei. 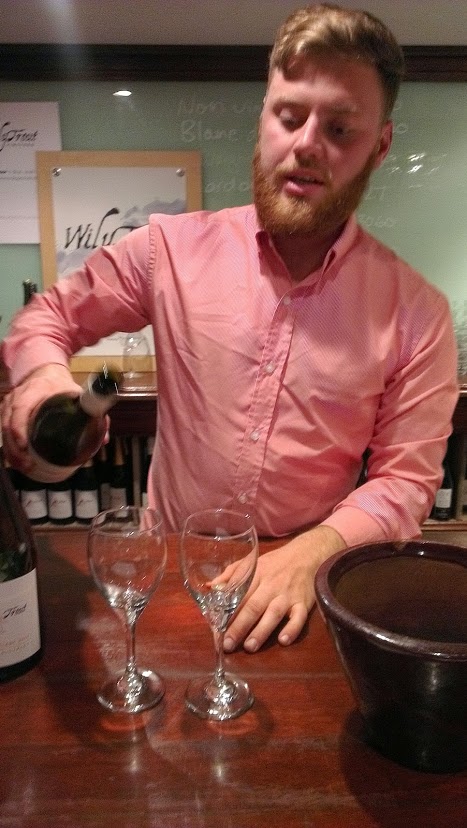 I couldn’t resist another wine tasting, this time from Wily Trout Vineyard, made from grapes grown on the hills around Poacher’s Pantry.  The Shiraz paired nicely with the prosciutto sandwiches.

I have a serious weakness for chocolate, so I gravitated to the Robyn Rowe chocolate stand.  Robyn was all smiles and dimples, and looked like she belonged in a gingerbread house.  (As a fairy godmother, not as a wicked witch.)

And her chocolates are divine, which probably explains why she is a repeat Sydney Royal Show champion.  I went back for a third taste test of her banana flambe chocolates, and also enjoyed immensely her ganache using Clonakilla muscat.  Her decadent dollop chocolate sauce was also wickedly good.  But it was the lime zest chocolates, handed around on platters, that really wowed me and almost everyone else who tried them.  One of the other humans was more forthright than me and asked if she could have two: I regretted not doing the same – what was I thinking?

And these chocolates are ethical as well.  Robyn’s husband explained how they purchase free trade cocoa beans from Ghana.  The farmers are paid a fair wage for their crops, which helps to make their farming more sustainable.  And no child labour is used to produce the cocoa beans used in Robyn Rowe chocolate.

The other wow dessert was the chocolate and chestnut tart provided by Silo Bakery.  This was a giant sized tart, filled with rich chestnut frangipane that encased a layer of molten milk chocolate — the tart had obviously been freshly baked because the chocolate was still slightly warm.  Several of us remarked that the chestnut layers were surprisingly light: not as dense as say an almond version.

I also enjoyed several pieces of Silo’s walnut sour dough and Coopers Pale Ale and Rye breads, that they served with generous slices of Manchego cheese, and pieces of fried kale chips.

With such good food, and good company, the convivial evening passed by quickly and before I knew it the evening had drawn to a close.  There were artistic stories and tastings that I sadly did not get to discover.  But already I have plans to go on a picnic exploration of the region with friends, involving stop at Poacher’s Pantry to get supplies before heading onto other venues for tastings and explorations. Ah, La Dolce Vita – what a sweet life!

I'm loving this beautiful spring weather. With the

Are you doing it tough right now? Or do you know

“When you let go, a very interesting change of e

Not sure what to do with those bananas sitting on

Just a bit of fun. It’s not everyday that I get